Every year I've gone to SXSW, I've ended up at the Austin Psych Fest/Levitation showcase at Hotel Vegas on Thursday. I've never been disappointed, even if there are often hiccups. This year, I decided to simply spend my entire day at the showcase. I was well rewarded.

Hotel Vegas expanded this year by taking over the adjacent property at 1504 E 6th St., which they called the annex patio. This caused some sound bleed between that and the main patio stage, but it was still pretty cool to have four stages active at one venue.

Cosmonauts (annex patio): This band has been on my radar for years, but I never managed to see them until now. They had a rocky start with some mix problems. They produced a psychedelic smog that was a bit dirtier than I would've liked but still fairly strong. The real weak point was that their vocals were sloppy and the lyrics were bad.

No Joy (annex patio): I recently got into this band and was really looking forward about this set. However, when they got on stage, guitarist Laura Lloyd was nowhere to be seen. Instead, singer/guitarist Jasamine White-Gluz was accompanied by another guitarist, a drummer, and a backing track for the bass. That was already a bit disappointing, but the mix wasn't very good, either. Vocals were mostly inaudible (even more so than on record), and the second guitar was too low. Furthermore, they were having problems with their in-ear monitors. They eventually pulled them out, tried one song without them, and then just gave up after four songs. They only played for about fifteen minutes. 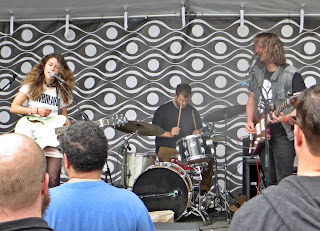 Mint Field (Volstead inside): I only caught a few minutes but found them interesting enough to make note of. Hailing from Tijuana, they made a shoegazer storm that sounded promising albeit vague.

Merchandise (main patio): I just saw them the day before but couldn't resist another opportunity. Here's the setlist:

This time, the intro jam wasn't as noisy and actually had words, but I couldn't understand them. "In Nightmare Room" was a delight, and "My Dream Is Yours" was a good additional selection from the new album. Carson Cox remarked that it was the "festival version", presumably because of a simpler arrangement, but I thought it worked well. "Become What You Are" was again the weaker slow version, but it's still a great song, and this time, they brought out Rat Bastard for the second half to make a delightful noise jam. They'd brought him out the last time they played at Hotel Vegas two years ago, but this time his contribution was much better suited. Cox also threw in a few lines of The Velvet Underground's "Sister Ray" in the midst of it. It seemed like their set was shorter than the one the day before, but the sound was better, they played stronger, and it made for a tighter package. 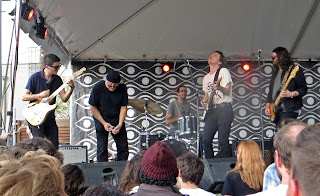 Death Valley Girls (annex patio): At first, their retro rockabilly style seemed hokey and artificial, but their enthusiasm was infectious, and I gradually realized that their lyrics were hilarious, particularly with songs like "Pink Radiation" and "I'm a Man Too". When the frontwoman switched to an organ, their sound improved, and the songs where drummer sang lead were a bit better executed. 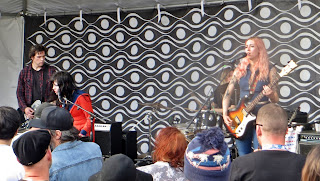 Boogarins (annex patio): I first saw this band at my first SXSW three years ago (and saw them again mere weeks later at Austin Psych Fest) and while I don't like their second album (Manual, 2015) as much as their first, I still wanted to see them again. The sun-drenched sound of their first record was mostly absent, replaced by a lot of psychedelic guitar jams with vocal effect experimentation. The new drummer was quite active and was a good addition. The new songs weren't as melodic as the older ones, but they've also become better musicians and improvisers, such that even the older songs were retooled and rearranged into something new. I missed the harmonies, though; only "Lucifernandis" from the first album featured them. [Edit 2018.11.10: Here's the setlist:] 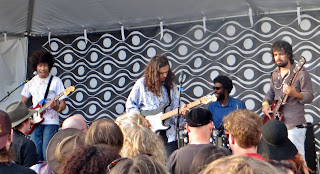 The Blind Suns (Volstead inside): A French psych band with English lyrics and slight country and rockabilly touches. They ranged from melodic pop with a bit of jangle to heavy rock jams. I liked their use of a partially electronic drum kit, but was disappointed by what sounded like a backing track for the bass parts. I couldn't quite figure them out, but I appreciated their juxtaposition of styles. I was also entranced by the unaffiliated team of projector artists working their magic. 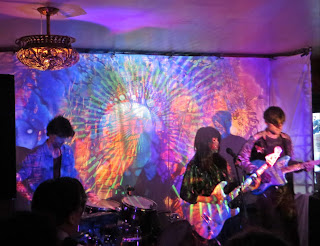 Vedett (Volstead inside): A French band on the line between punk and psych. They used keyboard backing tracks that almost sounded like synthpop underneath the noisier, aggressive live instrumentation. It was an odd mix that didn't quite gel right.

Frankie Rose (main patio): I was very interested in seeing her in part due to her strong track record in other bands, but her set seemed to get off on the wrong foot with monitor and mix problems. She kept complaining about a "vocal sample" not being in her monitors, but I never really heard anything that fit that description during the set, and I question the use of such a thing in a rock band. I liked their post-punk style and the reverb- and delay-heavy guitar tones, but the second guitar and keyboard were hardly present in the mix. At least the bassist had a solid, driving style that meshed with the drummer to venture into Krautrock territory at times. It seemed like their set was short, perhaps because the sound crew was tired of dealing with her petulance. 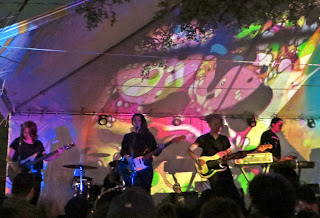 Ringo Deathstarr (main patio): I've seen them a couple times before, and while their basic formula hasn't changed (My Bloody Valentine-style shoegaze with wild guitar solos), their execution has only gotten better with time. They follow the Jesus & Mary Chain aesthetic of noise plus pop, except that they prefer a bit less pop and a bit more punk. They've clearly worked on their dynamic range, because they managed to cover ground from the heavenly shimmering of The Chameleons to power trio hard rock riffage. The guitarist and bassist seemed to do a lot more singing together, which also worked in their favor. This was their best set I've seen yet.

Tempers (Volstead inside): An electronic duo with a darkwave edge. They mostly relied on backing tracks, but one member played guitar throughout and occasionally provided backing vocals. The combination worked well, and their stark appearance fit the sound. The light show had moved outside, so they were shrouded in dark shadows and white light. At times I was just barely reminded of the darker sides of Beach House. 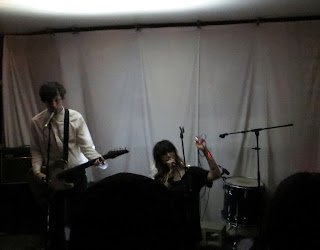 Indrajit Banerjee (main patio): A highly skilled sitarist accompanied by Gourisankar on tabla. They played just a few pieces built around captivating improvisation, and although each one was rather lengthy, I hardly noticed how much time had passed.

Golden Dawn Arkestra (main patio): I've seen them many times before and they've never disappointed. This time, they didn't march through the crowd as is their norm, but there were still about fifteen people on stage, a lot of dancing and messages about taking care of our planet, and a really strong dose of astral funk. They played several of their best songs along with what I believe are two new songs. They are always an incredible sight to behold and it's practically impossible to resist their grooves. Here's the setlist: 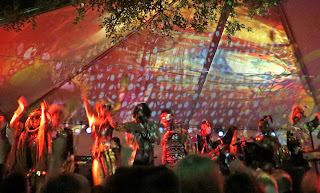 Matt Hollywood & the Bad Feelings (annex patio): After rejoining The Brian Jonestown Massacre around 2010 and recently being unceremoniously removed, Hollywood has taken a break from band associations and has begun touring under his own name. He performed several BJM songs, a few by his other major band, The Out Crowd, and one or two new compositions from an upcoming solo album. While the BJM songs are classics that I was pleased to see Hollywood carry the torch for, I started to notice that all of his songs followed a similar pattern. They start with a slow guitar groove and spaced out singing, invariably about sex or drugs, and then suddenly they break into a big distorted jam with psychedelic guitar solos. At least in musical terms, it's a good pattern, but it did start to get old. Here's most of the setlist: 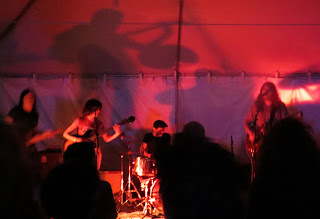 On the way out past the main patio, I caught a bit of Survive's synthesizer soundtracks, but I was too tired to stick around.

Scores:
Cosmonauts: C
No Joy: D
Merchandise: A-
Death Valley Girls: B-
Boogarins: B
The Blind Suns: B
Vedett: C
Frankie Rose: C+
Ringo Deathstarr: A-
Tempers: B+
Indrajit Banerjee: B
Golden Dawn Arkestra: A+
Matt Hollywood & the Bad Feelings: B-
Posted by Patti at 11:46 PM