I started out my day at the AdHoc showcase at Cheer Up Charlie's. I unfortunately came too late to catch Jay Som, but the rest of the afternoon looked like a great lineup. First I saw Tim Darcy of Ought on the inside. He played indie rock with slightly odd arrangements, deadpan vocal delivery, and a consciously wry and arty edge. The songs didn't stand out that much to me, but there was something appealing in his weirdness. He played one song that he described as "older" that was much more conspicuously folk-oriented.

I went outside and caught the last few minutes of Pill. I was curious about them for their supposedly aggressively progressive lyrics, but all I really heard was a lot of noisy sax punk. Next up outside was Forth Wanderers, a straightforward indie rock quintet. Their youthful energy was encouraging, but they played loose and too much by the numbers. 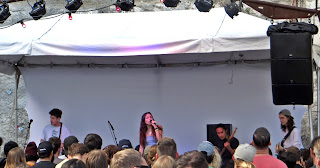 [Forth Wanderers at Cheer Up Charlie's.]

I got bored and went inside to see some of singer-songwriter Aldous Harding. She played an acoustic guitar and sang with a strong voice and an intense look of focus. On some songs, she was accompanied by a guitarist/pianist that shared her precision. Unfortunately, she was somewhat drowned out by the outside stage, and I wish I'd been able to hear more of her words and listen in a more suitable condition.

For a complete change of pace, the next (and last) band on the inside was Merchandise. This was my fourth time seeing them, and thankfully they put on a much better show than their last SXSW appearance in 2015. This time, they appeared as a quartet with a drummer I didn't recognize. Here's the setlist:

They started with a lengthy, noisy jam that made me wonder if they were just going to fool around and use their set as an excuse to experiment on stage. Eventually they finally settled into "Lonesome Sound", the only song they played from their new album, A Corpse Wired for Sound. They made some excuse about it being hard to do the new ones at SXSW (presumably because of a lack of a keyboardist or the setup to play samples and such), but played a brief song that I didn't recognize as a sort of special bonus for the festival. An updated "Schoolyard" was the real treat, though. I was also thrilled to hear "Become What You Are", one of their best songs, but they played it at a bizarrely slow tempo, such that it lost half the energy. "True Monument" was great, and "Anxiety's Door" was spectacular, with bassist Pat Brady even adding backing vocals. It was a good set, even if it seemed like some pieces were missing. 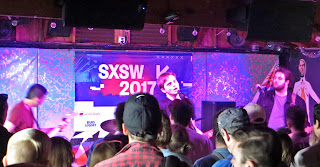 [Merchandise at Cheer Up Charlie's.]

After a break for food, I made my way to the Speakeasy Cabaret to see the folk rock band One Week Wonder from Iceland. I was surprised by how small the audience was compared to how nice the venue was, but I guess that's what you get for calling yourself a speakeasy and only admitting entry from the back alley. Anyway, the band used each instrument (electric guitar, acoustic guitar, keyboard, bass, and drums) effectively to create an interplay that made each song sound carefully thought out. The acoustic guitarist also provided pleasant harmony vocals. They sang mostly in English but had one number in Icelandic. It seemed like they ran out of material after half an hour, despite that I think they had more time available. I would've gladly stayed for more. 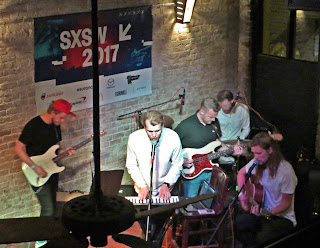 [One Week Wonder at Speakeasy.]

I then tried to get in Mohawk to see Le Butcherettes, but the lines were long due to a popular lineup including a surprise appearance of At the Drive-In. I gave up after half an hour and walked over to Stubb's, where I practically walked right in. I'd been expecting a long line there as well due to a strong lineup, but I suppose it is a large venue. Sylvan Esso was a bit late, but I forgave them, because I was quickly won over by their charm, ebullience, and frequent dance breaks. They played electronic music in a minimalist, pop-oriented style that might otherwise make me skeptical, but they pulled it off with a creativity that convinced me that they weren't just pandering to mainstream tastes. The singer was powerful and skilled, and while I'm not sure exactly how much the other guy was actively contributing, I enjoyed what I heard enough that I stopped worrying about it. 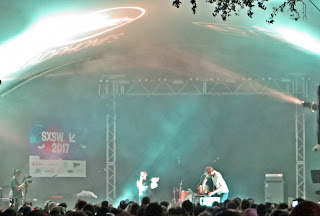 I went straight from there to Barracuda's backyard to see Chastity Belt, since I'd missed them the day before. The quartet had a slight 90s rock vibe but with better atmospherics. Their songs had trance-like patterns with faded vocals that just barely kept things grounded. They largely eschewed traditional solos, but when they did resort to one, it was a minimalist, noisy affair that was delightfully contrarian. They surprised me when the drummer and one of the guitarists swapped instruments and vocal duties for one song. It seemed all the members could sing comfortably, but they never went so far as to grace us with harmonies. 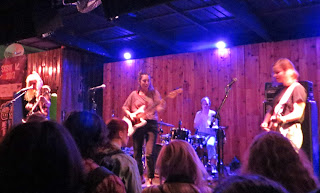 I then went to Esther's Follies, where Albin Lee Meldau was still in the middle of his Swedish pop/R&B mashup. I hardly knew what to make of him and his band: they played convincingly, but there was a weird nervous energy and a retro vibe that seemed out of place and time. The grooves were decent and I was impressed that the drummer managed to play keyboard parts with one hand while still keeping the beat going.

The real reason I was there was for Die Heiterkeit from Hamburg. Their austere, dramatic style fit the theatrical venue well. I was expecting something along the lines of serious-minded electronic pop, but they played with a rock band lineup (guitar, bass, keyboard, drums). If "slowcore" is a real genre that is worth upholding, then I suppose this band fits the label. Their songs were grand, powerful, and unconventional. The guitarist sang with effortless finesse, and the bassist and keyboardist provided excellent harmonies on just about every song. 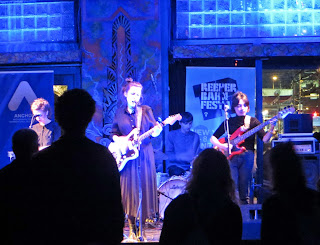 Scores:
Tim Darcy: B-
Forth Wanderers: C-
Aldous Harding: B-
Merchandise: B+
One Week Wonder: B+
Sylvan Esso: B
Chastity Belt: B
Albin Lee Meldau: C
Die Heiterkeit: A-
Posted by Patti at 7:58 PM