I've heard about the free day parties at Hotel San José on South Congress for years now, which they amusingly call "South by San José". They usually manage to get most of the best bands every year to play there, and this year was no exception. However, since I live north of downtown, it's always seemed like too much of an ordeal to prioritize the extra distance to get there. This year, despite how sore my legs were, I made it happen and rode my bike there.

My goal was Khruangbin, an East Texas band claiming influence from 60s Thai funk. It seems bizarre or ridiculous, and it kind of is, but when I listened to the band in advance, I liked them so much that I immediately bought their album. You can argue about cultural appropriation, but the only real questionable element is their name. The music itself is complicated, since it's not like the original Thai funk musicians existed in a vacuum. Besides, the supposed influence is somewhat tenuous: this is decidedly Khruangbin's own style.

The trio is smooth, relaxed, and chill, but always tight. The grooves were infectious and their lyrics were infrequent and simple. They played just as much as necessary and not much more. The guitarist was the nominal lead player, but his style was not overwhelmingly flashy. Meanwhile, the bassist was studied but casual and the drummer precise but uncomplicated. (When asked to solo by the guitarist, he just stopped playing for a measure.) There's a lightness or breeziness to the band that risks seeming pedestrian, but they reach a good balance. The guitarist did most of the talking, and he was a bit over the top, but even that was forgivable. The only other downside was that the bass was overwhelming at first and it seemed there was some sort of low-frequency hum or feedback that was interfering with their sound. 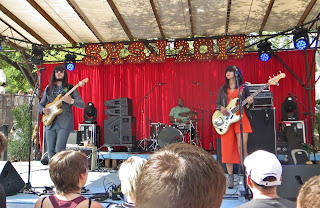 On my way back downtown, I made a slight detour to visit a friend at Threadgill's, where Ray Wylie Hubbard was performing acoustic guitar country blues with his son on lead electric guitar and a drummer. The guitarwork was superb, although I wished that Ray would've taken more leads instead of leaving most of them to his son, whose style was more conventional.

I headed back to Red River Street to see Survive (which they often annoyingly stylize as S U R V I V E) at the Sound on Sound + Brooklyn Vegan day party at Cheer Up Charlie's. Unlike Thursday night, I actually saw most of their set, and they performed somewhat longer than anticipated. The band is just four men operating synthesizers without any hint of interaction with the audience. They sound cinematic, spatial, and (dare I say) epic, much in the vein of Tangerine Dream's sequencer heyday. They've been on my radar for a while, since they are based in Austin and play the festivals here frequently, but it seems they've recently simultaneously increased their recognition and improved their abilities.

After a stop at the Peruvian food truck, I went to Latitude 30 to see Anna Meredith, an English composer. She performed keyboards, vocals, clarinet, percussion, and glockenspiel and was accompanied by tuba, drums, electric guitar, and cello. Most songs were instrumental, but all five musicians sang, usually together. The sound was underpinned by electronics, but existed in a strange semi-classic continuum that certainly isn't rock but also isn't really what people think of when they hear "classical". Even "art rock" and "prog rock" aren't appropriate, but if the terms hadn't already been co-opted, they might have worked. At any rate, the music was energetic and unconventional. It was a bit hard to tell what was what, as some instruments were occasionally apparently inaudible, but at other times were effected to such an extent as to sound synthetic. The guitarist would do these crazy runs that recalled speed metal, but the tone was usually more like a buoyant synthesizer. 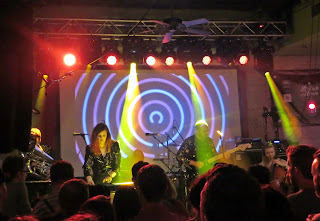 Next was The Living Hour from Winnipeg at Esther's Follies. I enjoyed their warm dream pop sound on record, but on stage, it didn't quite come together. They just sounded like a slow indie rock quintet without much energy or groove. It didn't help that there was interfering noise coming from neighboring venues. The highlight was that the singer occasionally wielded a trombone. She wasn't even exceptionally skilled with the instrument, but that extra element entirely improved the texture of their sound. Even more rarely, the drummer picked up a trumpet, which also helped. Otherwise, there were good parts here and there, such as some atmospheric guitar and rousing crescendos, but none of their songs were particularly notable. 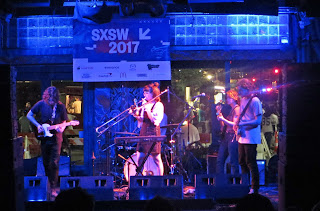 [The Living Hour at Esther's Follies. Note the trombone and trumpet.]

I was at a loss for what to see next, as there weren't a lot of bands that I hadn't already seen left on the schedule that interested me. After another break for more food, a friend and I decided to take a chance on the young Polish electropo duo The Dumplings on the patio of Swan Dive. They started out fairly conventionally and unconvincingly, but they gradually picked up energy and improved their performance as they went along. The singer's vocals became more impassioned and impressive as she started singing more songs in Polish. I also appreciated the other member's use of drum pads and live bass guitar. 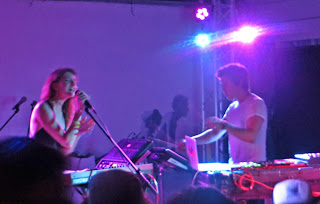 [The Dumplings at Swan Dive Patio.]

At that point, I was tired and ready to be done. There were still a couple hours left of the festival, but nothing called out to me enough to make the detour worthwhile.

Scores:
Khruangbin: B+
Survive: B
Anna Meredith: B+
The Living Hour: C
The Dumplings: B
Posted by Patti at 3:19 PM