I started my day at the Twin Peaks-themed Showtime showcase at Clive Bar. It was fairly weird, as I'm not really sure if there was any connection whatsoever between the bands playing there and the television show. In fact, considering the nature of the show, the one band I saw there is perhaps an odd choice. But anyway, I was there to see Let's Eat Grandma, an electronic pop duo of two teenagers from England. They were a fairly hyped act, and I was impressed by the creativity of their studio recordings. However, on stage, most of their songs were slow, drawn out, and not very inspired. They both sang fairly well, but the guitarwork and electronics were rather plain. There was one brief sax solo that seemed included solely for the sake of having a sax solo. After about twenty minutes, they seemed to be experiencing laptop problems in the middle of a song. After both members had a try at fixing it, they unceremoniously gave up, closed the set early, and walked off. I think this band has promise and plenty of time to grow and learn, but that was not the show I was hoping for. 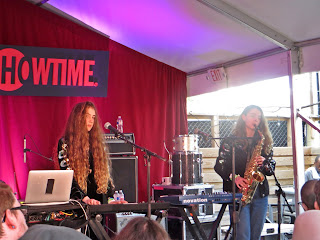 I then biked across town to Waterloo Records in the hopes of seeing Middle Kids from Australia. However, there was a surprisingly long line, and I didn't get through it until after their set was finished. I could hear something of a general indie rock sound, but I couldn't discern enough to form any real opinions.

At least I was able to make it in to see the headliner of the day party: hometown favorites Spoon. Since I hadn't been able to make it to one of their "residency" shows at The Main (they didn't go on until 1am each night), I was really hoping to catch this show. It paid off. Spoon brought their top game and played a strong set of a few new songs and a bunch of career highlights. Even in their five-piece touring formation, they still remain tight, focused, and well-honed. They strip their songs down to the essentials and leave no excess. That isn't to say there aren't any flourishes, but rather that you sense that every note they play is there for a reason. They still remain inventive, dynamic, and fresh after all their years. Here's the setlist (with help from here):

Encore:
10. The Beast and Dragon, Adored

That encore was a legitimate surprise! Encores are already very rare at SXSW, and in this case, the record store staff had announced that the show was over and the band wasn't coming back on. People were already streaming out of the exits when the cheering broke out and the band reappeared for one more. 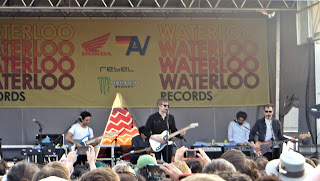 After a break for food, I went to my first official showcase of the night at Barcelona to see Perera Elsewhere, born in London but based in Berlin. The venue is entirely underground beneath 6th Street, and the vibe is something of a techno dungeon. It was long, narrow, dark, not entirely clear where the performer was or when she started, and full of drunken revelers entirely unconcerned with a live music performance. The music was something like electronic folk music made as if lost in the woods and attuned to the sounds of nature. Perera's voice was airy and sounded like it was just a part of the larger soundscape. She also played trumpet with effects that recalled Jon Hassell. Her chosen name is appropriate; the style is hard to place and sounds like it came from some unknown place that's barely known. It was very strange but fascinating. It's a shame that the drunks were loud and oblivious to their interference. While I liked the music, I was glad to escape the weird vibes of the venue.

I went to what might be the polar opposite, specifically the "historic sanctuary" of St. David's Episcopal Church, where I saw Agnes Obel, originally from Denmark. She straddled a line between being a singer-songwriter and a classical composer. Primarily working with cellos and keyboards, she and her band created a stately, operatic, bizarre, intense, ominous swell of music. This is perhaps what was originally meant when the label "gothic" was first applied to music. The venue was oddly appropriate, or at least the acoustics worked in her favor. The drunken frat boys seated in front of me with beer and a vaporizer did not, and unfortunately the enforcer figure did not catch them. On my way out, I was amused by the young greeter's parting words: "See you in another year," spoken in such a way as to be ambiguous whether it was meant sincerely or sarcastically.

I then went a block down the street to another church, the Central Presbyterian, to see Robyn Hitchcock. I know him best from his long-ago membership in The Soft Boys, but he's maintained a prolific solo career since their dissolution in 1981. He appeared alone with just a guitar, playing a sort of weird singer-songwriter folk music in a whimsical, witty, and surreal vein. His songs would often end up where you wouldn't expect, both lyrically and musically. His voice is unusual but skilled, much like his guitar technique. Between songs, he would tell jokes or stories that carried the same air of fancy, humor, and wit. Rarely did his narratives make sense from start to finish, but I was smiling during the whole thing. The acoustics of the venue were superb and for once I could hear and understand every word that he said or sung. 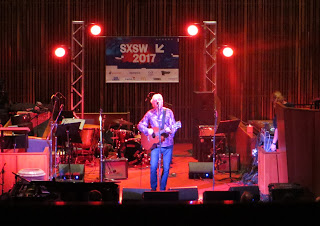 As quickly as I could, I jumped on my bike and headed to Rainey Street to catch as much of Colombian electronic musician Ela Minus on the patio of Lucille as possible. I liked her cool, chill synth tones although they were abstract and nebulous. The environment was both distracting and advantageous: the well-heeled crowd that sipped their drinks and conversed carelessly seemed largely unaware that a live performance was underway, but I also had the impression that Ela Minus' music was well-suited to being a part of a larger setting. She risked fading into the background, but you could listen actively or passively and enjoy it either way.

I ventured up the street to get in line for Neko Case at the Clive Bar, but the badgeholder line was long enough that I didn't think I would make it in. Having just seen her last summer as part of case/lang/veirs, I accepted my fate and moved along. I met up with a friend, ate some more food, and eventually made my way to Cheer Up Charlie's, where I ran into another friend by chance.

I was there to see Priests, a Washington, DC post-punk band with a heavy political angle. They actually leaned more punk than post, and their aggressive, unrelenting energy was a bit overmuch. Even though I agreed with their political diatribes during and between songs, I found their approach to be unappealing. There's something impressive about their intensity, and there was skill in their angular, sharp-edged performance, but I couldn't get into it. 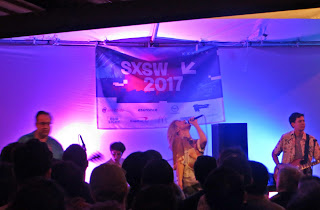 [Priests at Cheer Up Charlies's.]